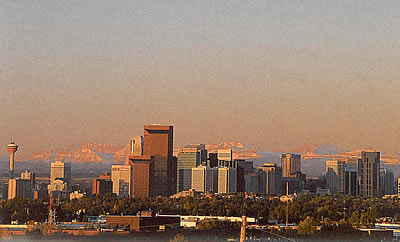 Calgary is the largest city in Alberta. It is situated so close to the Canadian Rockies that most days these magnificent mountains are clearly visible from the city. As such, it is an ideal location to begin or end your Rockies rail tour! The predominant image of Calgary may be of rodeo bronco busters and oil rigs, but the city has so much more to offer. As the head office of Canada Rail Vacations, we are proud to show off our city to travellers.

Calgary is located at the confluence of the Bow and Elbow rivers. These bodies of water feature heavily throughout the city. In the summer it is common to see people floating leisurely down the rivers in inflatable rafts. The city is also known for its extensive trail and park system, offering picturesque views of Calgary’s architecture mixed with nature. The winter months offer skating on the Prince’s Island lagoon, as well as amazing skiing at nearby resorts. Calgary also enjoys a strange winter weather phenomenon known as a chinook, as warm dry winds blow over the Rockies from the Pacific, and residents rejoice as temperatures rise and snow melts.

The infamous Calgary Stampede is essentially a city-wide party, and is a large draw for many travellers. Billed as the “Greatest Outdoor Show on Earth”, for ten days the streets of “Cowtown” are filled with people in cowboy hats, horses, and of course, our signature dish, free pancake breakfasts. The daily afternoon rodeos fill the Grandstand with spectators eager for the excitement of bull riding, barrel racing, and steer roping. At night, the chuckwagon races take centre stage as teams of thoroughbred horses sprint around the track. Followed by the extravagant Grandstand show, featuring new themes and performances each year, a day at the Stampede will be one you never forget!

I think a good rule of thumb when exploring a city is to start at the centre. In Calgary, it’s marked for you by the Calgary Tower! Located on Centre Street, the Tower is 75 stories high, with a 360 degree observation deck, as well as a glass-bottom viewing area. A new interpretive program was unveiled this year, and now guests can use a device available at the front desk to focus on features of the city visible from the tower and hear detailed information. There is also a revolving restaurant at the top, offering spectacular views of the city as you enjoy your meal.

The Inglewood area is the oldest neighbourhood in Calgary, and as such it boasts many of Calgary’s historic buildings. With this rich sense of history, Inglewood also offers trendy shopping and many tasty restaurants, as well as access to the River Walk, the newly completed trail winding along the Bow River, the Calgary Zoo, and the Inglewood Bird Sanctuary. Strolling through these areas will easily fill an afternoon, or an entire day!

The Calgary Zoo is one of the leaders in conservation programs. With groupings done by continent, one can visit the creatures of the world without leaving Calgary’s core. You can even travel back in time and visit the Dinosaur Park, which has recently been outfitted with moving, roaring animatronic dinosaurs. Other areas of note include the recently-developed penguin plunge, featuring four different species of penguin, the African Savannah, with hippos and giraffes, and of course, our amazing tiger family.

If an afternoon of shopping is up your alley, Calgary has many options for you. 17th Avenue SW is well known for its assortment of trendy, unique shops, as well as a wide variety of dining options. Stephen Avenue is located in the heart of downtown, and offers lots of shopping choices as you stroll along and enjoy Calgary’s atmosphere. If the weather is inclement, you can head to Chinook Centre which is the largest enclosed shopping destination in the city, and browse the multitude of retail selections. Or if you’d like to take a break and get off your feet for a while, you can catch a film at the movie theatre attached to the shopping centre.

If you’d like to get a taste of Calgary’s history, we recommend stopping by the Glenbow Museum or Heritage Park. The Glenbow Museum offers exhibits examining southern Alberta’s past, as well as the largest art collection in western Canada. In addition, it showcases international travelling exhibitions, so there’s always something new to discover. Heritage Park is billed as Canada’s “largest living historical village”, and it’s easy to see why. With an extensive layout featuring a steam locomotive that loops the park, a paddlewheel boat that sails guests out on the reservoir, countless re-created buildings, and interpreters dressed in period garb, a visit to Heritage Park will take you back in time. In addition, train aficionados will love touring the historic rail cars featured at the Railway Roundhouse.

These are just a few of the many activities and attractions Calgary has to offer. As you can see, Cowtown is not just cowboys and cattle (though we have a lot of those too!) We hope you’ll come and visit our city – we at Canada Rail would love to treat you to some of our warm western hospitality! Please enquire about adding on two or three nights in Calgary to any of our vacation packages.