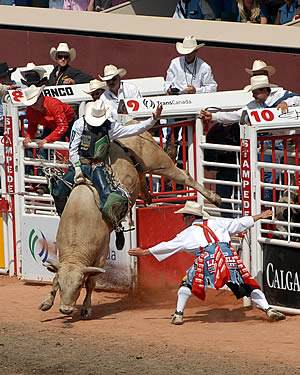 The Calgary Stampede Exhibition and Stampede, also known as the ‘Greatest Outdoor Show on Earth’, takes place in Calgary, Alberta, Canada this year from July 6 to July 15, 2012.

Last year, visitors to the 2011 Calgary Stampede with Canada Rail Vacations were in very good company. British Royals, Prince William and Kate Middleton, the Duke and Duchess of Cambridge, attended the Stampede and were part of the Stampede Parade. The Parade is the start to the ten day exhibition in Calgary, and while the Stampede Parade is telecast worldwide each year, the coverage of the 2011 parade received more viewers than ever recorded.

The 2012 Stampede will mark the 100th anniversary of the first ever Calgary Stampede and Canada Rail Vacations is pleased to present the ‘Calgary Stampede Train’ package. You can experience history in the making during our centennial tour special. We have eight train tour departures during the ten day event. We have reserved eight hotel rooms and sixteen seats daily to each of the Calgary Stampede Rodeo and Grandstand events. Three nights in Banff, the Calgary Stampede and the Rocky Mountaineer train are some highlights of this spectacular rail vacation. Experience Rocky Mountaineer’s world renowned GoldLeaf service in the breathtaking dome car. While in Calgary, Stampede rodeo and grandstand tickets are included. Representatives from Canada Rail will be in attendance at each of the events to assist our guests with vacation planning and to maximize their one of a kind Calgary Stampede experience. Space is limited. We look forward to hearing from you to reserve your seats.

The Calgary Stampede transforms our city, with a population of close to 1.1 million, to a friendly and fun western-themed town with too many activities to list including free pancake breakfasts, live music, casinos, rodeo events, and one of the best Grandstand show events offered. There are many free events to take in, or if you are a daring soul, you can enjoy a deep fried treat before getting on an exciting ride on the midway. Be sure to pack your western shirts and denim jeans.

Riding the train is a wonderful way to travel, and a Canadian rail vacation through the Rocky Mountains in the summer, with a stay in Calgary during the Stampede will be unforgettable.