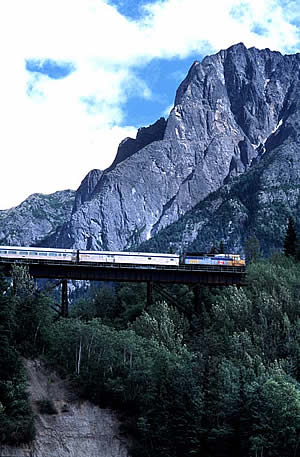 It gets called everything from Trans-Canadian Railroad to simply Canada Train, but after riding it few forget the spectacular journey across Canada by rail.

Like most massive building projects, the rail line across Canada took years of planning. The country was still forming and rivers were the closest things to highways across much of the land. So the government promised Nova Scotia and New Brunswick a rail link to Upper Canada in order to lure the two Maritime provinces into confederation. Likewise, the same promise was made to British Columbia, this time asserting it would be complete within 10 years, when it joined confederation in 1871.

The enormous undertaking was expensive and controversial and eventually cost Prime Minister John A. Macdonald his job. But Macdonald was the grandfather of a Canadian Railway and he fought for re-election. By the time he was back in office in 1878, the entire railway plan was on the rocks and way behind schedule.

Undeterred, Macdonald sank his teeth back into the project and by October 1880 had found a group of businessmen to form a syndicate to build a transcontinental railway. They hired William Cornelius Van Horne, an American whose reputation was one of a man who could get things done. And so he did, laying almost 1,000 kms of track each year until the project was complete.

On their way west, laying track at breakneck speed, workers on the rail line stumbled on a series of caves housing steaming hot pools about 130 kms west of Calgary. The sulphurous Cave and Basin pools stank, but their hot, mineral-rich waters were a marked relief for the tight muscles and weary backs of those charged with laying sleepers and driving spikes. Such a fountain of youth, coupled with splendid surrounding scenery, set in motion numerous entrepreneurial wheels. As tension mounted over who would have the rights to develop and market the pools, Prime Minister MacDonald waded in and declared the area a protected park. He named it Banff Hot Springs Reserve.

Park boundaries changed several more times up until 1930, when the size of Banff was fixed at 6,697 square kms in the National Parks Act. The act also renamed the park Banff National Park. It was named after the Canadian Pacific Railway station, which in turn was named after Banffshire in Scotland.

The CPR Company then built the Banff Springs Hotel, which remains an iconic edifice in the National Park. The hotel and hot springs alone make Banff a popular stop on any Canada tour. For many, the accompanying scenery makes it essential.

Since their discovery by Europeans in the late 19th century, the hot pools have continued to evolve. In the 1990s the natural springs and caves were closed to public access to reduce erosion and damage. Within the Cave and Basin scientists discovered a unique snail found nowhere else on earth. These snails are particularly vulnerable to extinction, which helped contribute to the permanent closure of the natural caves where they’re found.

The good news is that those seeking the waters’ healing properties can still access them in the popular hot pool facility on Sulphur Mountain, though seasonal fluctuations in water levels means that sometimes the soft spring waters are subsidized with fresh water to maintain pool levels.

Banff remains one of the most popular stops for anyone on a Canadian Rockies Tour and is most popular with passengers of Canadian train trips. And it’s no wonder. The bustling community is on the doorstep of great hiking and picturesque views, boutique shopping and friendly locals.

Canadian train tours offer the perfect alternative to driving and flying. Hours spent cramped in the car are no way to holiday. Nor are the sterile air and monotonous views from an airplane window. Instead, gaze out the windows of a train, have a nap, take a stroll through the train or sit in the restaurant car and watch Canada unfold around you while you sip a cold drink. The luxurious amenities and the relaxing pace make this a holiday no one forgets.