Luxury in the Wilderness: Hotels of the Canadian Rockies 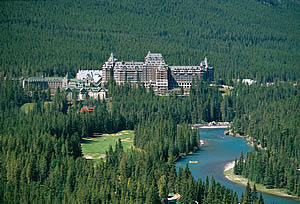 There are few hotels in the world with the stature as those constructed by the Canadian Pacific Railway in what is today Banff National Park. The Fairmont Banff Springs Hotel, known as the “Castle in the Rockies”, is built at the base of Sulphur Mountain and holds the same kind of allure to Canadians as the Parliament Buildings in Ottawa. Meanwhile, a 56-km train ride northwest, the Fairmont Chateau Lake Louise, often referred to as a “Diamond in the Wilderness”, sits atop the edge of its namesake lake with a jaw-dropping locale and an endless list of adventures at its doorstep.

Canadian Railroad Roots of the Hotels

Although it was supported by the Canadian Government as an exercise in nation building, the Canadian Pacific Railway rang up massive debts as it pushed its way across the continent, eventually connecting the new province of British Columbia to the rest of Canada with the CPR, a trans-canadian railroad, was completed in 1886.

To help offset costs and increase train traffic, CPR general manager William Van Horne suggested capitalizing on the scenery of the Rockies, which he believed would appeal to tourists who were prepared to journey great distances across Canada by rail to revel in the mountains. “Since we can’t export the scenery, we’ll have to import the tourists,” he famously said.

Close to the hot springs of Sulphur Mountain, construction began in 1886 and in 1888, a luxury hotel opened inside a shingled log-framed structure, with rooms at $3.50 a night. Due to a number of fires and major renovations, none of the original building remains. What stands today resembles a Scottish Baronial castle, albeit one with a bowling alley, world-class spa, nine restaurants, a golf course and horse stables. Its stone towers and green roof tower high above the Town of Banff. Inside, it’s a maze of wondrous detail and superb hospitality. Famous guests like Helen Keller, King George VI, Marilyn Monroe, and Queen Elizabeth II stayed at “The Springs” during tours of Canada. 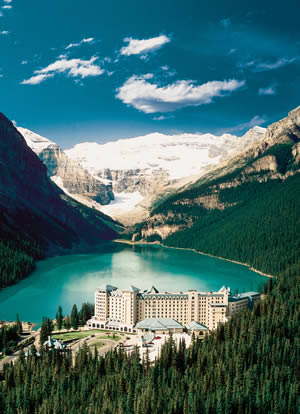 After CPR guide Tom Wilson became the first non-Native to see Lake Louise, and said “as God is my judge, I never in all my explorations saw such a matchless scene,” word spread of a deep blue high alpine lake with a magnificent setting beneath the glacier-fringed Mt. Victoria. Van Horne jumped at the opportunity. In 1890, the CPR build a log cabin at Lake Louise, soon to replaced by the larger “Chateau”, with its roots in the alpine heritage shared by the Swiss mountain guides who were brought in to lead hotel guests into the peaks. While the CPR marketed the Banff Springs as a luxury hotel, Van Horne sold the Chateau Lake Louise as a destination for backcountry adventures and alpinists. Mountaineers, artists, poets and horseback riders flooded in, along with royalty from Great Britain, Jordan, Monaco and Denmark.

Today, train tours include stops at Banff and Lake Louise, where modern travelers can journey to these National Historic Sites, following in the footsteps kings and queens, prime ministers and poets, climbers and skiers who’ve been drawn to the ‘castle’ and the ‘diamond’, and the majestic peaks that surround them, for 125 years.