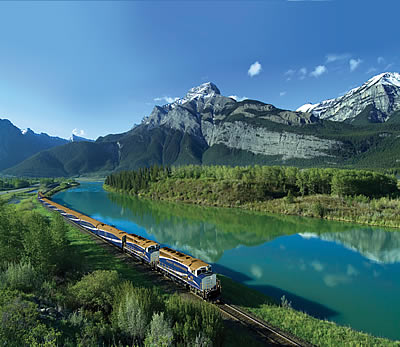 It’s a relatively small portion of the trans-Canada train ride, but the Rocky Mountaineer snaking through Banff National Park is among the finest portions of the entire trip.

Sure, a Canada train tour is to superlatives what gasoline is to fire. It’s not possible to describe oceans of golden prairie wheat waving in summer breezes without sounding like a romantic fool. Or to describe in clinical terms what it’s like to be captivated by Ontario’s Great Lakes as sun diamonds sparkle on their glassy surfaces. But it’s even harder to describe the deep blue and granite-gray Rocky Mountains in plain straightforward language.

The Canadian Rockies train chuffs through pine forests that cover most of Western Canada. From the comfort of the dome car and its glass ceiling it’s possible to take in the landscape in broad panoramic sweeps. On the right, jagged peaks covered for most of the year in snow rise as high as 10,000 feet and beyond. On the left, either a lake or a deep canyon with rushing water. Keep looking because it’s likely that somewhere in that vast landscape is a bald eagle wheeling on the thermals. And you never know, you might see a bear.

As the mountains begin to blend into one another, as relentless scenery inevitably will, there comes yet another diversion: The engineering masterpiece known as the Spiral Tunnels. This is one of the steepest, most scenic railway lines in North America, crossing the Kicking Horse River, and running under Mount Ogden and Cathedral Mountain. If a train is long enough, it will double back on itself and the engines will pass over the train they are pulling.

From there the locomotive thunders into Banff National Park, past turquoise Lake Louise and Moraine Lake, their waters as blue as glacier ice. The next significant landmark is Vermillion Lake, which was recently made even more famous by a Sports Illustrated swimsuit shoot. It was with the lake and sloping Mount Rundle as a backdrop that bikini-clad athletes from Brazil competed with the scenery for the title of most beautiful.

Minutes after passing Vermillion the train tour rolls into the Town of Banff. Photogenic Cascade Mountain looms over Banff Avenue. To the east is Tunnel Mountain, shaped like a sleeping buffalo, and south is the imposing slope of Mount Rundle. It’s possible to climb each of these in pursuit of rewarding views.

Banff’s downtown core is not far from the train station where all Canada train tours and Canadian Rockies trains stop. In just a few short steps, those rail passengers are on Banff Avenue, the urbanized centre of Canada’s first and oldest National Park.

The history of Banff National Park and the town began in 1883 when hot springs were discovered by three Canadian Pacific Railway workers laying track for Canada’s first transcontinental train. The hot, mineral-infused spring waters were thought to have healing properties and quickly attracted people to come and soak away their ailments. In response, the CPR built the famous Banff Springs Hotel, also known as the Castle in the Rockies because of its appearance, and visitors began to arrive from far and wide.

Those springs still exist today at Cave & Basin, a popular visitor attraction. Though they’re now closed to bathing, the steaming warmth of the Upper Hot Springs still attracts exhausted visitors on their Canada vacations. In fact, the springs continue to be an integral part of most people’s Canada train tour.

I’d read about the gondola up Sulphur Mountain and decided it would be a good way to get my bearings on the town. From atop Sulphur I could see Mount Norquay, the closest of Banff’s three ski resorts. Near Tunnel Mountain is the renowned Banff Centre, hub of the performing arts and home of the Banff Mountain Film Festival. To the right of the centre is the 27-hole Banff Springs golf course. Beside it are the rushing waters of the Bow River.

In winter, Banff is a desirable destination for all things snow and ice. But it’s in summer when the town really draws the crowds. Temperatures soar as high as 28C and locals and visitors cool off in mountain lakes.

I’m not sure if it’s watching the soaring, jagged peaks from the elegance and comfort of this old-world method of traveling, or if it’s the warm and friendly Banff locals that are luring my heart back, but as my Vancouver-Toronto train continued east across the great Canadian Shield, my mind kept wandering back to the beauty that is Banff.