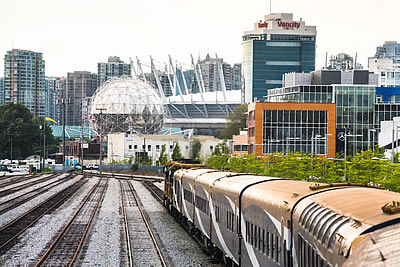 Home of the world famous Rocky Mountaineer, Vancouver is a city unlike many cities in the world. Situated in old temperate rain forests, on a clear day visitors can find views of the Pacific Ocean to the west, the North Shore Mountains, and Mount Baker in the United States to the south. With access to such beautiful geography, many Vancouverites like to make claims of golfing in the morning, sailing in the afternoon and skiing in the evening. I haven’t accomplished this lofty goal, but it’s actually attainable, and I’d love to meet a guest who tries – I’d be happy to join you!

Vancouverites are also pleased to boast of the city's international acclaim, continually being voted one of the World’s Best Cities to Live and one of the Greenest Cities in the World. These claims set high expectations for visitors, and most often you will not leave disappointed.

As there are a myriad of fun things to do while you are here in Vancouver, I will try to highlight some personal favorites to make your stay as enjoyable as possible. All of our partnering hotel properties are located in downtown core and you will be in close proximity to many of the city’s best and most popular attractions. Vancouver is a very easy city to navigate, and a vast majority of our guests receive Big Bus city passes as part of their package. Combining your Big Bus passes with some beautiful walking opportunities around the city's Seawall leaves you the opportunity to maximize your sightseeing time. If I’m reading your mind correctly, yes, I always recommend adding an extra night or two of accommodation while you’re here. Giving yourself a full 24-48 hours to adventure around the city will let you experience why Vancouver has earned such international notoriety.

In the words of my Mother, “I love the Vancouver Seawall!” (see map HERE). I asked her why and she replied, “two reasons, it’s beautiful, and it’s beautifully flat”. There you have it, and I’d have to agree with her. The Seawall goes around the majority of the downtown core, encompasses Stanley Park, and allows access all the way to Granville Island. The Seawall is very well marked, accessible by both foot and bicycle, and as mentioned, flat! On a sunny morning, no matter where your hotel is located, I highly recommend grabbing a coffee and starting your day with a stroll.

This is arguably one of Vancouver's best attractions. It's our version of New York City’s Central Park, only a little bigger. The park will be the obvious venue for the photographer in your family, with fantastic photo ops of the North Shore Mountains and The Burrard Inlet from Second Beach. Other highlights include the Aboriginal Village - a great way to take in some of Canada's Aboriginal history, the Vancouver Aquarium - be sure to check out the Dolphin Show, and Prospect Point - great views of the Lions Gate Bridge. As I mentioned, you can also circumnavigate your way around the park by way of the Seawall. The entire loop is approximately 8 kilometers (5 miles for you Americans), which can be a lot, so if you’re still keen to burn some shoe rubber the eastern tip of the park is approximately 3 kilometers and also offers great views. If you have received a Big Bus tour pass as part of your package, the Stanley Park Bus Loop is included with your ticket.

Interestingly enough Vancouver was originally named Granville, and we didn't take on our current title until 1886. Today, Granville Island is a fantastic little shopping district rife with west coast charm, a fantastic open air market, and plenty of local artisan shops to wander in and out of. It's one of my favorite places to grab a coffee and walk around on a lazy Sunday afternoon. If I were you I'd time your day so you end up here later in the afternoon and then head to The Sandbar Restaurant for dinner. Insist on sitting on the upstairs patio (although they have heat lamps and blankets bring something warm to wear). I promise you won't be disappointed.

Instead of getting around by bus or bike, why not a ferry?! The False Creek Ferries provide a fun way to transport yourselves to such venues as Granville Island, Science World and the Maritime Museum. You can catch the ferries from the Vancouver Aquatic Centre - Big Bus stop #9. The trip to over to Granville Island is included in your Big Bus pass, but I always recommend paying the extra few dollars to partake in visiting the rest of the stops in their loop. You can choose to visit any of the above mentioned attractions, or just stay on and enjoy the sounds and smells of the sea.

This was Vancouver's original downtown and named after 'Gassy' Jack Deighton as he was the area's first owner of a saloon. Today the city has managed to maintain the integrity of most buildings and you can view some of Vancouver's oldest architecture by strolling up and down Water Street, between Cordova and Carrall Street. If you’re visiting during July or August be sure to check out the Architecture Institute of British Columbia’s Walking Tours. The historic Steam Clock on Cambie and Water Street is of notable mention. Plus if you're a fan of pubs, The Irish Heather on Carrall Street between Water and West Cordova is in a beautiful old building with a great selection of whiskeys and scotches and a good menu for a lunch time snack.

If you like to shop, this is the place to be. Starting at Burrard Street you can head west on Robson and find shopping galore. If you have lollygaggers along for the walk, they can find a great escape atop the Empire Landmark Hotel in the Cloud 9 revolving restaurant. Its exact address is 1400 Robson Street. Now, be forewarned, the service is lackluster and I wouldn't recommend eating there, but the 360 degree revolving view is worth a nice glass of wine and a rest for the non-shoppers tired feet.

A pedal bike, not a Harley Davidson. Although the latter would be fun, if you're feeling spry one of the best things to do in Vancouver is to borrow a bike from your hotel or rent one from the many bike rental companies (ask your hotel concierge for your closest location). As I mentioned earlier, be sure to take your two-wheeler to the seawall! Of course, this is a weather permitting activity, but there are plenty of restaurants, cafes and bars along the way to wait out the rain and have a snack. Plus, it's a great way for you to show off all the new clothes you bought on Robson Street.

By all means, if you have any questions about places to see or things to do don't hesitate to ask. I know I like to be as prepared as possible before traveling and the more prepared you are the more open you can be to spur of the moment ideas. Have a great time here.