10% discount on now! Up to $2500 off per couple!!
One-Way ToursCircle ToursTrans-Canada Specials Reservations
Home Packages Best of the West (westbound) 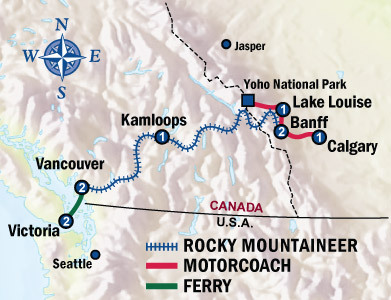 Overnight stays in Calgary, Lake Louise, Banff, Vancouver and Victoria truly make this the Best of the West. Other highlights include a tour of Yoho National Park and whale watching off Vancouver Island’s west coast.

• Transportation from Vancouver or Calgary airport (ask your Vacation Planner for details)
• Meals, other than onboard the Rocky Mountaineer train
• Gratuities for rail, hotel and transfer staff
• Canadian sales tax

* Upgrade from Silverleaf to Goldleaf aboard the Rocky Mountaineer train for an additional $591.

* Upgrade from Silverleaf to Goldleaf aboard the Rocky Mountaineer train for an additional £441.

* Upgrade from Silverleaf to Goldleaf aboard the Rocky Mountaineer train for an additional $831.

Upon arriving in Calgary you’ll have the rest of the day to explore the city. Calgary combines contemporary pizzazz with cowboy-ruggedness, creating a unique urban environment. Calgary Tower, the Calgary Zoo, the Glenbow Museum, Fort Calgary, Prince’s Island and Olympic Plaza are some of the city’s most famous attractions.

Transfer to Lake Louise in the morning, one of the most photographed settings in the world. You’ll check into the Fairmont Chateau Lake Louise, located along the shores of Lake Louise, giving you out-the-door access to one of the planet’s true wonder spots. Jagged, snow-touched peaks surround the turquoise-coloured lake, making every view picture-worthy. Canoe rentals allow you to explore by water. Or you can stroll along the lake’s wooded edge via the Lake Louise Lakeshore Trail, an easy hike with zero elevation gain.

From Lake Louise you’ll enter Yoho National Park, home to more than 30 peaks over 3,000 metres (9,000 feet) high. Your tour will visit many of the park’s most popular landmarks, including the appropriately named Emerald Lake and the Kicking Horse River’s natural bridge. You’ll then continue on to Banff, one of the world’s premier mountain town resorts.

A 4.5 hour guided tour will introduce you to the wonders of Banff. Highlights are many and include Bow Falls, which was made famous by Marilyn Monroe in River of No Return. The tour will also visit Tunnel Mountain Drive with its outstanding views of Mount Rundle, Cascade Mountain and Banff’s famous hoodoos (strange, finger-like rock formations). A ride to the top of Sulphur Mountain aboard the Banff Gondola will conclude your tour. From here you’ll enjoy panoramic views of the Bow Valley and surrounding Banff National Park.

Your Rocky Mountaineer train will continue west along the Thompson River before veering south into the Fraser River Valley. Here, you’ll follow the fast flowing path of the Fraser River, skirting steep canyon walls shadowed by the Canadian Cascade Mountains. Along the way you’ll pass Hell’s Gate, the valley’s most popular landmark, before arriving in Vancouver in the late afternoon.

Independently enjoy the day exploring any of Vancouver’s excellent attractions. Included in your travel package is your “Hop-on Hop-off” bus pass to tour Vancouver at your own pace. Your tour bus pass accesses the city’s most popular attractions including Gastown, Chinatown, Granville Island, Stanley Park and the Robson Street Shopping District. Enjoy strolling along the downtown beaches which overlook the harbour and Coast Mountains, or take the opportunity to do some shopping on Granville Island.

Today you’ll board a ferry for a tour of Victoria, located on the southern tip of Vancouver Island. Victoria, the capital of British Columbia, is annually recognized as one of the world’s prettiest cities. Your guided tour will take you to all of Victoria’s hotspots, with plenty of attention devoted to the Inner Harbour area. Admission to Butchart Gardens, one of western Canada’s most popular attractions, highlights the day.

This 3.5 hour experience off the coast of Vancouver Island provides the definitive exclamation point for your Canadian vacation. This coastal excursion is an exhilarating round trip of 50 to 80 kilometres in search of orcas, minke whales, grey whales, porpoises, harbour seals and other marine wildlife. You will ride aboard a custom-built catamaran boat that offers high speed with extraordinary stability giving you an exhilarating, safe and enjoyable whale watching experience. Comments by a certified marine biologist and naturalist are provided. You'll have the afternoon free to explore this lovely city. We recommend visting the Royal BC Museum, Thunderbird Park, strolling along the Inner Harbour and enjoying high tea at the Empress Hotel.

Your vacation ends upon checking out of your hotel. Victoria International Airport offers flights to many destinations.

This itinerary is also available in reverse on Mondays, Thursdays & Fridays.