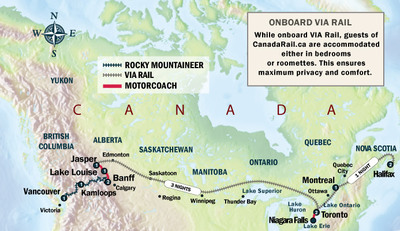 Travel over 6,400 kilometers (4000 miles) across the second largest country in the world. From Vancouver, on the Pacific West Coast, to Halifax, on the Atlantic East Coast, and all the spectacular scenery and culture in between, this tour has it all. A trip of a lifetime.

Attractions abound in Canada’s third largest city, making Vancouver the perfect starting point for your Canadian vacation. A “Hop-on Hop-off” bus pass will allow you to explore the city at your own pace. The tour bus accesses all of Vancouver’s most popular destinations including Gastown, Stanley Park, Granville Island, Chinatown, English Bay Beach and the Robson Street Shopping District. Overnight in your downtown Vancouver hotel.

The ocean air will change to mountain air as you wind into British Columbia’s rugged interior aboard a Rocky Mountaineer train. Mirroring the path of the Fraser River, you’ll snake through the Canadian Cascades, highlighted by Hell’s Gate, a narrow chute of charging water only 34 meters (112 feet) wide. Lush green forests will dramatically give way to a desert-like landscape as the train bends east along the Thompson River and approaches Kamloops, your home for the night.

Your Rocky Mountaineer train enters the famed Canadian Rockies. Every bend provides uncompromising views of jagged, snow-dusted peaks, cascading streams and earth-moving glaciers. The route passes many Canadian Pacific Railroad landmarks, including Rogers Pass in the heart of Glacier National Park, and the Spiral Tunnels, an engineering wonder, in Yoho National Park. After crossing the Continental Divide and entering Alberta, you’ll descend into Banff, one of Canada’s most famous resort towns.

Located in the center of Banff National Park, Banff is one of those rare towns that never disappoints. Every view in every direction possesses postcard-like quality. Your 4.5 hour tour will visit  Banff’s most popular landmarks including Bow Falls (made famous by Marilyn Monroe in River of No Return), Tunnel Mountain Drive, which affords views of Banff’s famous hoodoos (narrow, finger-like rock formations). The highlight of the tour will be traveling to the top of Sulphur Mountain aboard the Banff Gondola. Enjoy another night at your Banff hotel.

You’ll enjoy a guided tour through Banff and Yoho National Parks. Both parks, along with two others in the area, were collectively named a UNESCO World Heritage Site in 1984 for their alpine beauty. In Banff, you’ll visit Moraine Lake. Your tour will then continue over the Continental Divide into Yoho for stops at Emerald Lake, Takakkaw Falls and the Kicking Horse River’s natural bridge. Upon arriving in Lake Louise you’ll check into the Fairmont Chateau. From the hotel you’ll enjoy immediate walking access to the lake.

You’ll journey to Jasper along the Icefields Parkway, one of the most scenic stretches of highway in the world. Towering peaks accented by glacial-fed streams and thick pine forests line the entire route.  To heighten the experience, you’ll journey onto the Athabasca Glacier aboard a specially designed Ice Explorer bus. This massive flow is part of Canada’s Columbia Icefield.

A 10:00 am morning train departure out of Jasper will start to showcase Canada’s geographical diversity as you travel east aboard VIA Rail’s Canadian train. Over the next four days, you’ll journey through Edmonton and then into the provinces of Saskatchewan and Manitoba, home to Canada’s vast prairies and grasslands. Your train then continues into Ontario and travels just north of the Great Lakes, passing through scenic towns and villages hemmed by thick hardwood forests. You’ll arrive in Toronto on Day 10. CN Tower passes are included to enjoy the view. Overnight in your Toronto hotel.

Today you’ll travel south, passing through Hamilton, Canada’s steel capital, and Ontario’s scenic wine country before reaching Niagara Falls, one of the Seven Great Wonders of the World. To maximize our visit, you’ll board the Hornblower (rain gear provided) and glide to the roaring base of the Canadian-side Horseshoe Falls. You’ll also experience it from above, along a paved path that allows you to stand within feet of the Falls’ lip. After, you’ll travel north along the tree-lined ridge of the Niagara Gorge before entering Niagara-on-the-Lake, one of the prettiest villages in the world, especially during summer when every available patch of earth overflows with flowers. You’ll return to Toronto in the early evening.

You’ll travel east along Canada’s famed “Corridor,” aboard VIA Rail’s Canadian train in luxurious first class – the ultimate in train travel. After crossing into Quebec, you’ll enter Montreal, the second-largest French-speaking city in the world, and have all evening to wine and dine as you wish.

Located along the Atlantic Ocean, Halifax boasts the second largest natural harbor in the world. Historic Properties, a collection of old, renovated stone-and-timber warehouses along the waterfront, enjoys must-visit status. Explore Halifax on your own. Highlights of the city include St. Paul’s Church, the Historic Properties, ocean terminals and the area where the devastating Halifax explosion happened. You may also wish to visit the Halifax Citadel National Historic Park and Victorian Public Gardens.

This itinerary is also available in reverse on Thursdays.