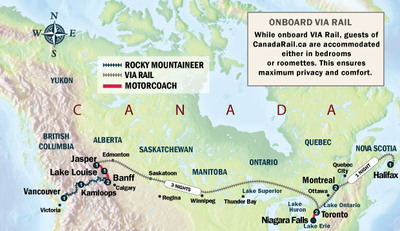 Experience Canada in all its majesty from coast to coast. Visit Halifax, Toronto, Montreal and Vancouver as well as Jasper, Banff and Lake Louise.

* Upgrade from Silverleaf to Goldleaf aboard the Rocky Mountaineer train for an additional $584.

* Upgrade from Silverleaf to Goldleaf aboard the Rocky Mountaineer train for an additional £438.

* Upgrade from Silverleaf to Goldleaf aboard the Rocky Mountaineer train for an additional $846.

Your Canadian rail vacation begins in Halifax, Nova Scotia, home to the world’s second largest natural harbor. Located on the Atlantic Ocean, this maritime city houses many attractions including the Citadel National Historic Site, the Maritime Museum of the Atlantic, the Halifax Public Gardens and the beautiful Historic Properties situated along the waterfront.

After a free morning, VIA Rail’s "Ocean" train departs at midday to begin journeying northwest across Nova Scotia and New Brunswick. After crossing into Quebec your train will follow the south shore of the Saint Lawrence Seaway into Montreal, the planet’s second largest French- speaking city. It’s one of those rare urban areas that achieves a perfect balance between cosmopolitan pizzazz and Old World charm. Overnight in your downtown Montreal hotel.

Enjoy the day exploring Montreal on your own. It is a spectacular city and offers so much for everyone.

Today you’ll ride in business class – the ultimate in train travel – along Canada’s famed “Corridor” into Toronto. Located on the northern shore of Lake Ontario, Canada’s largest city abounds with closely quartered attractions including the CN Tower, The Hockey Hall of Fame, Fort York, Ontario Place, Little Italy and Toronto Island. CN Tower admission is included today. We recommend going up and enjoying a nice dinner or watch the sun go down from the observation deck. Dare to walk the glass floor, sample the exquisite cuisine at the revolving restaurant or relax in the Horizon’s Café. The views of Toronto, Lake Ontario and the distant U.S. are unforgettable.

Bending around the western rim of Lake Ontario, you’ll arc south through Hamilton, Canada’s steel capital, and then through Ontario’s bucolic wine country before reaching Niagara Falls. A ride on the Hornblower (rain gear provided) will float you to the thundering base of the Canadian-side of Horseshoe Falls – one of life’s true wow-moments. You’ll also be able to experience the Falls from above, along a paved path that allows you to stand within feet of the Horseshoe Falls’ lip. Next, you’ll journey north along the park-like setting of the Niagara Gorge into Niagara-on-the-Lake, one of the prettiest towns on the planet, before returning to Toronto in the early evening.

In the morning, you’ll begin an epic three-night, four-province ride aboard VIA Rail’s Canadian train. From the comfort of your private room you’ll experience Canada’s incredible geographic diversity. Crossing through Ontario, north of the Great Lakes, you’ll enter Canada’s breadbasket – Manitoba and Saskatchewan. These two provinces are Mother Nature’s version of “less is more,” as swaying grasslands and golden fields of wheat stretch the horizon in every direction,. You’ll then enter Alberta, pass through Edmonton, the province’s capital, and pull into Jasper, located in the northern Canadian Rockies. After checking into your hotel, you can go for a stroll through this beautiful mountain resort town. You'll have a shuttle voucher to the Jasper tramway to get a higher perspective on your mountain home for the next two nights.

A motorcoach will transport you south on the Icefields Parkway, recognized as one of the planet’s most scenic stretches of highway. To maximize your experience, you’ll board an Ice Explorer bus, specifically designed for ice travel, and rumble on to the Athabasca Glacier. This massive ice flow is part of the Columbia Icefield, one of the largest nonpolar ice caps in the world. From here, you’ll continue south and check into the Fairmont Chateau Lake Louise. Located on the edge of the lake, you’ll enjoy out-the-door access to one of the world’s most beautiful alpine settings

Today’s mountain tour crosses the Great Divide into Yoho National Park. Yoho, a Cree word for amazement, does not disappoint. In 1984 it was declared a UNESCO World Heritage Site with the area’s other surrounding parks. And its shale fields harbor some of the world’s rarest fossils. The Kicking Horse River’s natural stone bridge, Emerald Lake and Takakkaw Falls are just a few of the sites you’ll visit. From Yoho you’ll continue on to Banff. (please note the Mountain, Lakes & Waterfalls tour from Lake Louise to Banff does not begin until May 1 when snow melt allows access to the higher mountain roads. A scenic transfer is substituted for earlier departures.)

A 4.5 hour tour will introduce you to Banff’s many wonders, stopping at Bow Falls (made famous by Marilyn Monroe in River of No Return). The tour also visits Tunnel Mountain Drive with its breathtaking views of Cascade Mountain and Banff’s famous hoodoos (thin, finger-like rock formations). And culminates with a ride to the top of Sulphur Mountain aboard the Banff Gondola. Enjoy another night at your Banff hotel.

Your Rocky Mountaineer train will follow the Thompson River west before hooking south into the Fraser River Valley. Here, you’ll follow the historic Fraser River, which was once the focus of gold-seeking prospectors in the late 1800s. Along the way you’ll pass Hell’s Gate, a sliver of a canyon that transforms the Fraser into a surging gush of whitewater. A late afternoon arrival in Vancouver will afford you plenty of time to explore Canada’s third largest city. Gastown, Stanley Park, Canada Place, Chinatown, the Maritime Museum and Granville Island are some of Vancouver’s most popular attractions.

Your tour ends upon checking out of your Vancouver hotel. Feel free to use your “Hop-on Hop-off” bus pass will allow you to explore the city at your own pace. Extra nights available!

This itinerary is also available in reverse on Sundays. 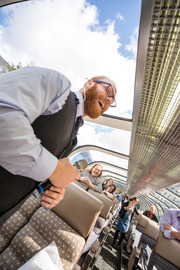