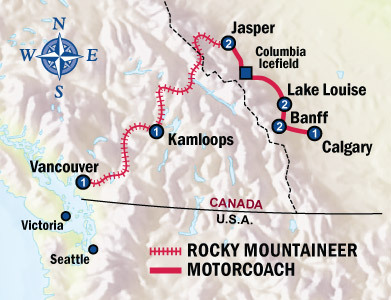 A variation on the popular Rockies Explorer package, this relaxing itinerary enjoys two nights in Jasper, Lake Louise and Banff as well as a night in the city of Calgary, Alberta.

Upon arriving in Calgary you’ll have the rest of the day to explore the city. Calgary combines contemporary pizzazz with cowboy-ruggedness, creating a unique urban environment. The Calgary Tower, Calgary Zoo, Glenbow Museum, Fort Calgary, Prince’s Island and Olympic Plaza are some of the city’s most famous attractions.

Spend the morning exploring Calgary before transferring to Banff. The Canadian Rockies are just one hour west of Calgary so enjoy the view from this very scenic transfer to Banff, arriving early enough to give you plenty of time to explore this magical mountain resort. Tucked in the heart of the Canadian Rockies, natural wonders abound in every direction.

Your Canadian vacation kicks into high gear with a guided 4.5 hour tour. You’ll visit Bow Falls (made famous by Marilyn Monroe in River of No Return),and Tunnel Mountain Drive, a stretch of road with unobstructed views of Mount Rundle, Cascade Mountain and Banff’s famous hoodoos. You’ll ride aboard the Banff Gondola to the top of Sulphur Mountain (2,451 meters, 8,041 feet) for panoramic views of Banff and the surrounding Bow Valley.

The ride to Lake Louise will be highlighted by a visit to Banff and Yoho National Parks. Both parks, along with two others in the area, were collectively designated a UNESCO World Heritage site in 1984. Beginning in Banff, you’ll visit Moraine Lake. Next, you’ll cross the Continental Divide into Yoho for visits to Emerald Lake, Takakkaw Falls, one of the largest in Canada, and the Kicking Horse River’s natural bridge. You’ll then arrive in Lake Louise and check into the Fairmont Chateau Lake Louise. From the hotel you’ll enjoy out-the-door access to one of the planet’s greatest alpine settings.

Plan your own itinerary for the day. Enjoy adventurous activities such as canoeing on Lake Louise, or hiking a scenic mountain trail, or taking photos in this astonishing area. Use your Lake Louise sightseeing lift pass to get high for wonderful views. Complimentary shuttles to the lift are available. Spend a second night at The Fairmont Chateau Lake Louise.

Your tour continues north, following the Canadian Rockies along the Icefields Parkway, rated as one of the most scenic stretches of highway in the world. To maximize the experience, you’ll journey onto the Athabasca Glacier aboard a specially designed Ice Explorer bus. This massive ice flow is part of the Columbia Icefield, the largest nonpolar ice cap on the planet. The backdrop of mountains surrounding the glacier creates an incredibly dramatic setting. From here you’ll continue on to Jasper.

Today you’ll enjoy a guided tour through Jasper National Park, considered the most rugged of the region’s four parks. A guided gentle walk at Maligne Canyon and Maligne Lake highlights the day. Maligne is the largest glacier-supplied lake in the Rockies and second largest in the world. Towering, snow-blanketed peaks surround the lake, making it an endless Kodak moment.

You’ll travel west through the Canadian Rockies aboard a Rocky Mountaineer train. This memorable ride snakes in and around jagged, snow-powdered peaks and past glacial lakes and streams, highlighted by Mount Robson, the region’s highest mountain at 3,954 meters (12,972 feet). After crossing the Continental Divide you’ll enter British Columbia and begin a slow descent out of the mountains into Kamloops.

Your Rocky Mountaineer train travels west out of Kamloops, following the Thompson River before turning south and entering the Fraser River Valley. Along the way you’ll pass Hell’s Gate, a narrow slot of rock that transforms the Fraser River into a rage of whitewater. You’ll reach Vancouver in the late afternoon, giving you time to tour Canada’s third largest city. A “Hop-on Hop-off” bus pass will allow you to tour at your own pace. The bus accesses some of Vancouver’s most popular attractions including Chinatown, Stanley Park, Gastown, the Robson Street Shopping District and English Bay Beach.

This itinerary is also available in reverse on Sundays, Mondays & Thursdays.