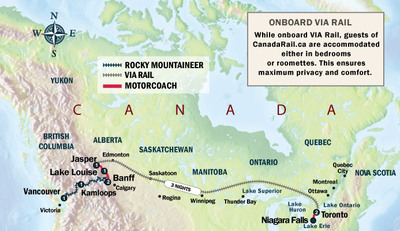 Canada, a country built by rail. What better way to explore it than by train? This tour will take you between Vancouver and Toronto, with visits to Niagara Falls and the mountain towns of Banff, Lake Louise and Jasper included along the way.

• Transportation to/from Vancouver and Toronto airports
• Rail station transfers in Jasper and Toronto
• Meals, other than onboard the Rocky Mountaineer, VIA Rail and Niagara Falls Daytrip
• Gratuities for rail, hotel and transfer staff
• Canadian sales tax

* Upgrade from Silverleaf to Goldleaf aboard the Rocky Mountaineer train for an additional $591.

* Upgrade from Silverleaf to Goldleaf aboard the Rocky Mountaineer train for an additional £441.

* Upgrade from Silverleaf to Goldleaf aboard the Rocky Mountaineer train for an additional $831.

After checking into your hotel, the rest of the day is yours to tour Vancouver, home to the 2010 Winter Olympics. You’ll be given a “Hop-on, Hop-off” bus pass, which will allow you to tour the city at your own pace. The bus accesses all of Vancouver’s biggest attractions including Stanley Park, Chinatown, Gastown and the Robson Street Shopping District.

Your rail tour begins aboard a Rocky Mountaineer train, travelling northeast out of Vancouver into the heart of British Columbia. Highlights include the rushing waters of Hell’s Gate in the Fraser Canyon and the steep slopes and rock sheds along the Thompson River, before you ease along the shores of Kamloops Lake into your overnight destination of Kamloops.

Your journey continues eastwards to the mighty Canadian Rockies and the province of Alberta. Once again you will see a spectacular range of scenery as you travel across ranchlands, along rocky lakeshores, over high mountain passes and through the remarkable tunnels that form part of the rich rail history of the Canadian Rockies. Today’s highlights include Craigellachie where the last spike of the Canadian Pacific Railway was driven, the climb over Rogers Pass, the Kicking Horse Canyon, the Spiral Tunnels a remarkable feat of railroad engineering, and of course the glaciers and snow-capped peaks of the Canadian Rockies. Your journey today ends in the resort town of Banff this evening. Overnight in Banff.

A 4.5 hour guided tour will introduce you to the magic of Banff. Highlights are many and include Bow Falls and Tunnel Mountain Drive, which offers clear views of Mount Rundle, Cascade Mountain and Banff’s famous hoodoos (strange finger-like rock formations). The tour also includes a ride to the top of Sulphur Mountain aboard the Banff Gondola. This short eight-minute ride will afford you panoramic views of the Bow Valley and surrounding Banff National Park.

A guided tour through Banff and Yoho National Parks starts the day. You’ll first visit Banff, Canada’s oldest National Park, natural wonders abound. You’ll then cross the Continental Divide and enter Yoho National Park and visit such wow-spots as Emerald Lake, Takakkaw Falls and the Kicking Horse River’s natural stone bridge. After Yoho, you’ll enter Lake Louise and check into the Fairmont Chateau. Perched atop the eastern lip of Lake Louise, it provides instant access to one of the world’s most photographed settings.

Your tour follows the Canadian Rockies north, along the Icefields Parkway, one of the most scenic stretches of highway in the world. Snow-topped peaks border both sides of the Parkway, providing endless views of awe and wonder.  Along the way you’ll stop to board an Ice Explorer bus. Specially designed for ice travel, the bus will venture onto the Athabasca Glacier, which is part of the Columbia Icefield, the largest nonpolar ice cap in the world. You’ll spend the night in Jasper, another one of Canada’s premier mountain resort towns.

A 10:00 am morning train departure out of Jasper will start to showcase Canada’s geographical diversity as you travel east aboard VIA Rail’s Canadian train. Over the next four days, you’ll journey through Edmonton and then into the provinces of Saskatchewan and Manitoba, home to Canada’s vast prairies and grasslands. Your train then continues into Ontario and travels just north of the Great Lakes, passing through scenic towns and villages hemmed by thick hardwood forests. You’ll arrive in Toronto on Day 10. Feel free to use your CN Tower admission pass over the next few days at your leisure. Overnight in your Toronto hotel.

Day 11 Side Trip to Niagara Falls

The Niagara Falls full day tour will bring you to one of Canada’s most spectacular sights. You will make your way to Niagara through the towns of Hamilton - "the steel capital of Canada", St. Catharines - "the fruit basket of Ontario", and the wine region of the Niagara Peninsula. An ample amount of time will be spent at the falls to give you every opportunity to take pictures and admire the thundering waters. Included is a thrilling boat ride on the Hornblower for a unique view of the spectacular Horseshoe Falls. Other highlights include a meal and a trip along the beautiful Niagara Parkway which winds its way along the Niagara Gorge passing through the historic community of Niagara-on-the- Lake. Overnight in Toronto.

Your tour ends upon checking out of your Toronto hotel.

This itinerary is also available in reverse on Mondays & Fridays. 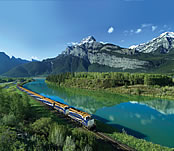